There is much to explore in China’s vast digital landscape, given its inherent diversity from the rest of the world.

Before COVID-19, eMarketer forecasted China’s overall digital ad spend to increase by 13% in 2020. This figure, however, was later revised to rise by 5% (to USD $75.33 billion) in light of the pandemic. 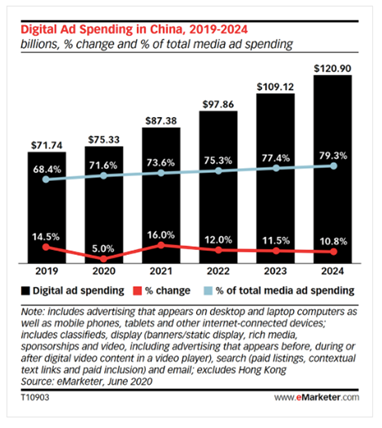 eMarketer also forecasted the programmatic display ad spend in China to reach USD $39.25 billion in 2020 (diagram below), representing 74.7% of the country’s total display ad spend. While this was forecasted back in Oct 2019, overall digital ad spend continued to rise during the pandemic, albeit at a slower rate.

As of Jun 2020, digital ad spend took up only 71.6% of total media ad spend (diagram above), highlighting the growth potential for programmatic ad spend in the coming years. Smartphones have become a mainstay in China, serving as the primary point of access to the internet. And the average time spent online has increased year-on-year: In Q1 2020, Chinese netizens spent the highest average hours per week on the internet—a whopping 30.8 hours! While those hours fell as COVID-19 came under control in Q2, internet usage was still an upward trend. The diagram below depicts the most used online channels alongside their ad spend distribution. The trend forecasts feed ads and e-commerce ads to continue dominating as popular channels and grow in ad spend.

In the next section, we explore what makes China’s digital landscape, particularly the programmatic landscape, a distinctive one to scale.

China’s digital landscape is foreign to much of the rest of the world due to its overarching Internet Censorship Policy. Numerous global internet powerhouses are blocked in China, restricting their netizen’s access to a wide range of apps and websites, including YouTube, Facebook, Twitter, Google, and WhatsApp. The list goes on.

While China has similar platforms, programmatic advertising can help scale the ad campaign size. Given the country’s population of 1.4 billion, it’s necessary to turn to Chinese programmatic platforms for advertising on China-specific domains, especially on their most popular channels. The graph above indicates just how heavily Chinese people rely on mobile phones: There are 932 million active mobile phones across the country, representing a staggering 99.2% penetration rate among total internet users. Many users even own mobile phones as their only source of internet access.

China shows great growth potential with its current internet user penetration rate at only 67% of its total population (approx. 940 million people). This potential is increasingly self-evident as rural citizens have begun using the internet more profusely, particularly in 2020. In terms of digital ad spending, China is rapidly catching up with the US, the highest global spender. The latter houses 275 million mobile users—an approximate 97% mobile penetration rate—and almost 85% of its population has internet access.

Facebook and Google’s shared duopoly is out of the equation in China’s digital advertising market.

However, China’s programmatic advertising marketplace has its own players that dominate market share: Baidu, Alibaba, and Tencent (a.k.a. BAT) are regional powerhouses that dominate web search, e-commerce, and social. Behind them are newcomers, like RED and Bytedance, that have more recently entered the market.

Unlike in North America, where publishers plug into third-party technology vendors to manage ad sales, publishers in China build and rely on their own programmatic ad technology. As BAT makes up China’s most dominant publishers, they have their own platforms to control advertising, operating as silos independent of one another.

While dominant players like BAT have developed sophisticated ad-buying technology, they formed their own closed ecosystems in the process. Therefore, ad campaigns cannot be centrally optimized given the difficulties in sharing data across platforms.

China’s digital market is more opaque than the rest of the world.

Ad networks in the west generally charge transparent service fees and allow real-time bidding on their platforms. Real-time bidding, in turn, facilitates purchasing of ad impressions based on market prices.

Inferencing from the above, we can observe China’s complex media environment. In this environment, where publishers prefer owning their ad exchanges, there is no one way to manage all advertising on a single platform. This market fragmentation also implies that ads can come in many different shapes and sizes.

Ad frauds are a well-known occurrence across the programmatic advertising industry, and China’s market unfortunately shares that limelight.

Ad frauds occur in many forms, including:

Over the last few years, the digital ad fraud rate in China rose as high as 40%. In 2019, ad frauds in China even accounted for 30.7% of the total advertising spend. By stark contrast, it was estimated that ad fraud accounted for just 2.4% in the UK during the same period.

A way around it: iPinyou

iPinyou is the programmatic advertising giant that connects into the ad exchange of BAT.

Founded in 2008, it was one of the first companies to bring programmatic buying to China. iPinyou is China’s largest independent demand-side platform (DSP), accounting for 59.8% of the local programmatic buying market serving branded advertisers. It now serves an average of 24 billion ads daily.

Headquartered in Beijing, with offices in Shanghai, Guangzhou, and Silicon Valley, iPinyou owns the largest and highest quality DSP available within and outside China.

iPinyou’s success is down to its foresight.

We’ve mentioned the unwillingness of the big BAT publishers to share data across platforms and that they work very much in silo.

There’s good news though. As iPinyou is a DSP and not a publisher, it can work closely with Baidu and other internet giants in China, including (but not limited to) e-commerce site JD.com and OTA’s sites Ctrip and Qunar.com. Forming such close partnerships gives iPinyou data access for cross-data analysis, which can optimize ad spend across the iPinyou programmatic platform.

In a bid to promote transparency in digital advertising, iPinyou was the first to launch a fully transparent trading platform (Optimus Prime) integrable with third-party monitoring and safety companies, like IAS and Grapeshot. With zero tolerance for fraud, they develop products based on big data and artificial intelligence to minimize inefficiencies.

Entering the Chinese digital market isn’t as daunting as it seems, though working with the right platforms is critical to success. With iPinyou as our DSP partner, we help foreign advertisers connect with China’s lucrative pool of audiences.

What is Programmatic Advertising?

In broad terms, programmatic advertising is the automation of media purchase and advertisement placement in the digital sphere.

By relying on programmatic capabilities, people can save time originally intended for manually preparing insertion orders or ad tagging and instead optimize the quality of their campaigns.

What is a DSP?

A demand-side platform, or DSP, is a centralized automation tool that allows advertisers to purchase, serve, and track ads across the entire media landscape. They plug into ad exchanges and ad networks, where a variety of publishers make their ad inventory accessible.

DSPs help to optimize their ad inventory by:

With DSPs, advertisers can capitalize on a broader ad inventory to optimize their targeting of large audiences.

What is an SSP?

Supply-side platforms, or SSPs, work similarly to DSPs, but think of them as platforms designed for publishers instead. Publishers use SSPs to place, manage, and optimize their online ad inventory.

Publishers can also maximize revenue by setting price floors—the minimum price at which they are willing to sell their impressions, either to specific buyers or through channels. Likewise, SSPs plugs into ad exchanges and ad networks, connecting to DSPs.

What are ad networks?

Imagine a department store where various brands are available within one store. In this analogy, the shoppers are the advertisers, while the brands represent the publishers. An ad network is akin to a department store, except it exists digitally.

For publishers, they will want to sell their leftover ad inventory in as many ‘department stores’ (ad networks) to maximize their sales.

Meanwhile, ad networks help advertisers connect with as many ‘brands’ (publishers) as possible.

Since the ad inventory segments into various targeting categories (age, location, gender, etc.), advertisers will purchase ad inventory on a grand scale based on their desired target audience. This would be quite time-consuming if done manually.

What are ad exchanges?

While ad networks are a simplified way of buying and selling ad inventory, publishers still face large pools that are unsold. As such, ad exchanges were born, where impressions sell in real-time and command a market price.

Now, visualize a marketplace with ongoing auctions. This encapsulates ad exchanges in a nutshell, where DSPs, SSPs, publishers, advertisers, agencies, and ad networks continually buy and sell ad inventory. Through real-time bidding (RTB), ad inventory is sold on a ‘per-impression’ basis, where the highest bidder wins.

To recap, ad exchanges help publishers maximize their unsold ad inventory. For advertisers, because targeting specifics are more honed in ad exchanges than in ad networks, they can bid for impressions based on behavioral targeting. In this scenario, advertisers can maximize the value of their ad spend.

This level of display automation allows you to leverage existing networks to better reach users in China across the buying journey, generating greater re-targeting opportunities and subsequently customer retention.

Ready to maximize your digital marketing in Asia?