In the early stage of the Internet, most advertisements were Banner ads shown as words and flat pictures on the network. They passed direct stimulation to the audience. The information transmission of text image ads is simple and straightforward.

The required network traffic is small and it’s loved by advertisers. PPC also belongs to this type of advertising. It passes product information through simple text, as shown below. 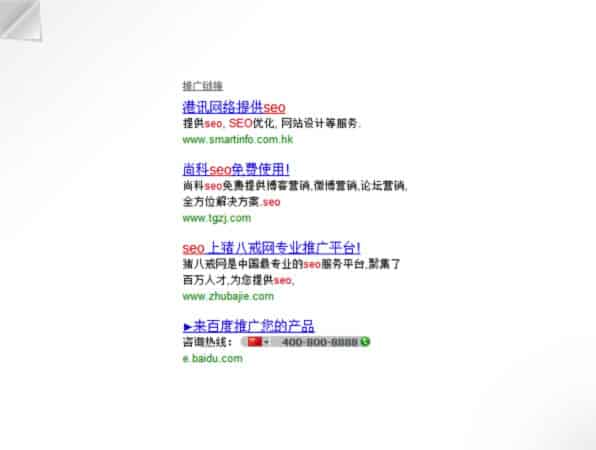 Rich media ads show product features in flash or other media forms. They integrate a large number of programming techniques, which is a characteristic of rich media ads. In the form of a short video, advertising expression is more abundant. And they also can interact with the audience which attracts the attention of the audience.

Baidu’s Hong Media is a new precise display advertising network designed for the promotion of products and brands in China. Hong Media works well with most major media. It will show a relevant rich media ad, according to what the visitor is viewing. The ad is shown in the lower right corner of the webpage (sample as the below).

By integrating rich media ads into search engine results, it not only increases advertising revenue, but also brings more traffic to Baidu. And then there is more opportunity to showcase Baidu’s PPC content, which can generate more advertising revenue again. Baidu and Google are taking two different approaches to the use of rich media advertising. I think Baidu’s method is better. Both Google’s and Baidu’s ads are targeted, however Baidu will display advertising which relates to the content of pages viewed by the viewer. And it will take part of the traffic back to Baidu.

As a result, Baidu both can increase its influence and traffic; while at the same time getting revenue from advertisers, to kill two birds with one stone. Google only exists as an intermediary. The advertisers display ads on Google’s partner sites. This has no effect on Google traffic.

While rich media advertising has many benefits, there is still a very large amount of search engine users, so the use of regular PPC ads will not be shaken in the short term. We note that Google’s search results may include video ads. Does this indicate that Google will merge PPC and rich media ads?

Rich media is good for the viewers and cannot be ignored. What will Baidu and Google will do next to face this situation? Let us wait and see.